I saw in an earlier post the mention of Tup's wool. Well, here it is along with the original Tup's blend and a Tup's Indispensable of my tying. 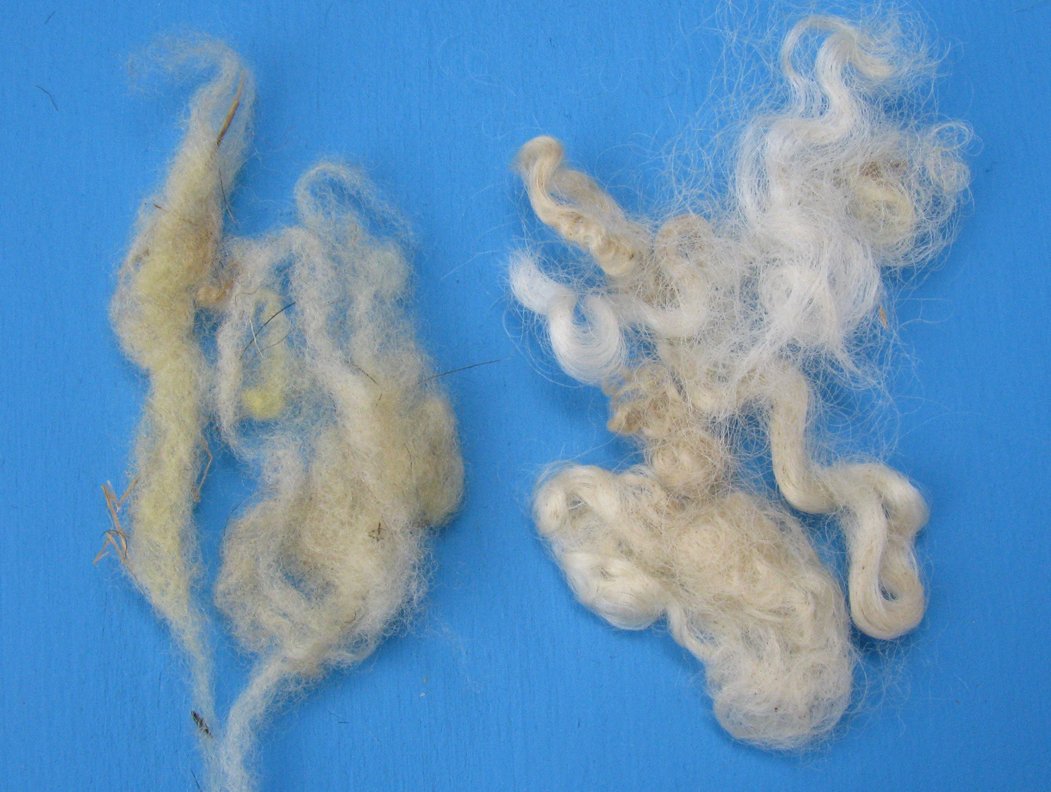 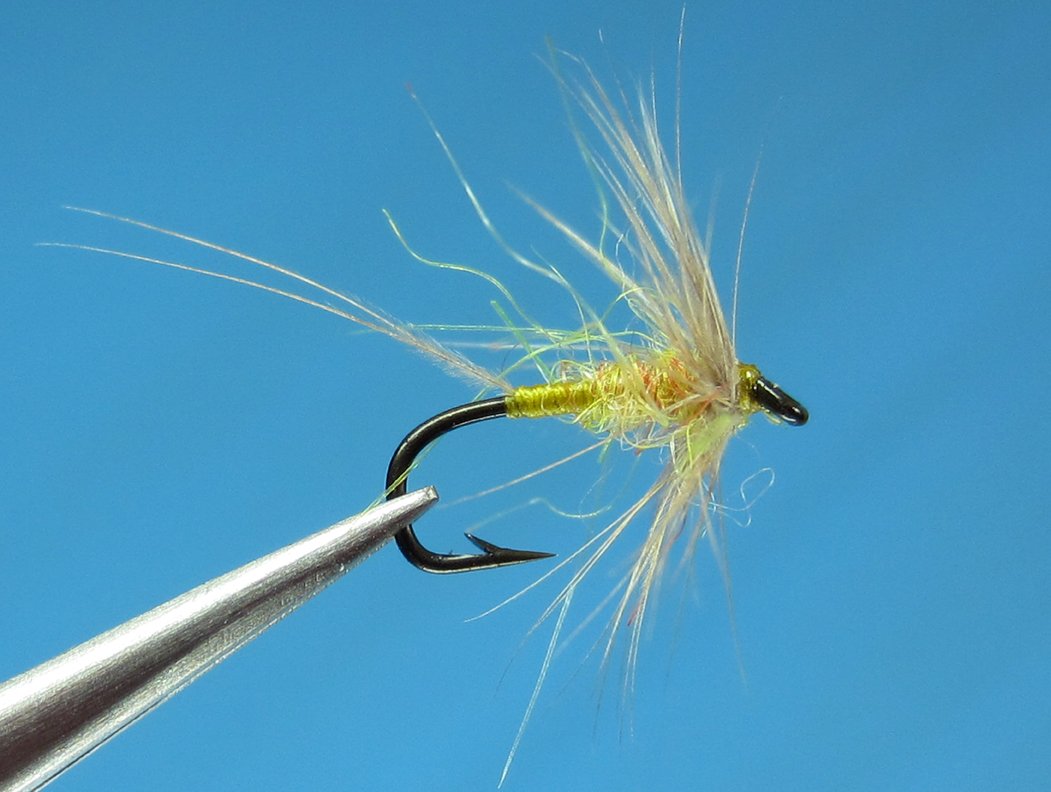 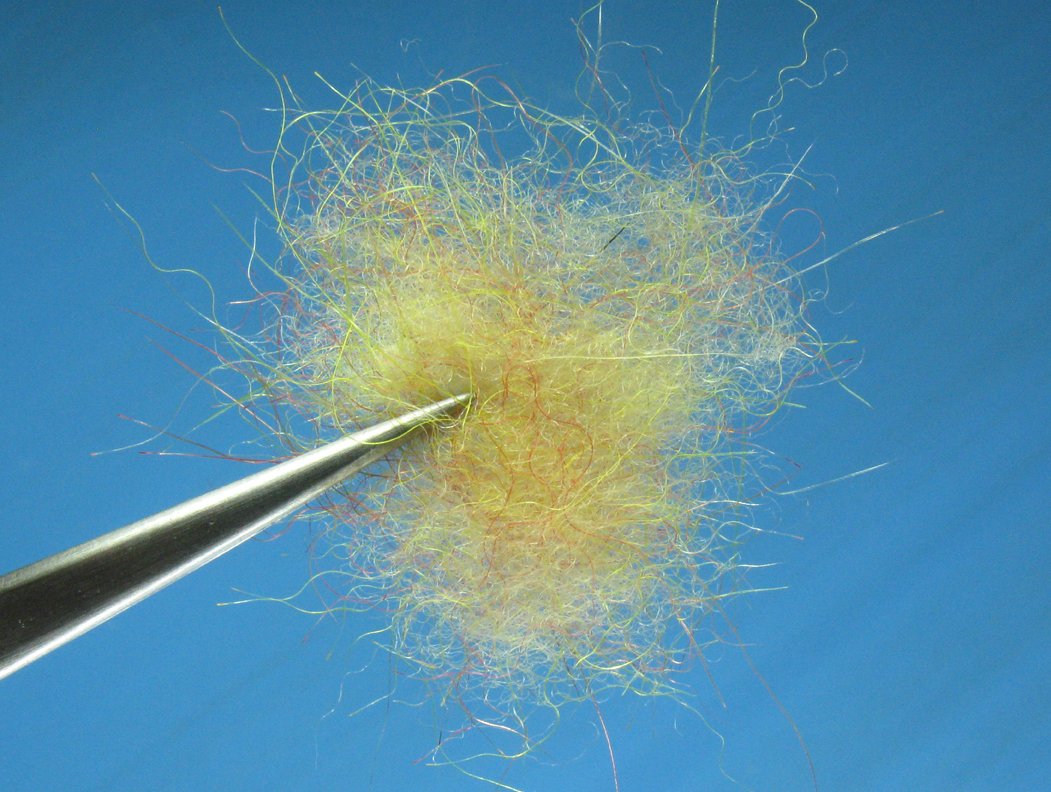 Greenwell John, I decided to move your Tups Indispensable post to start a new topic so it would not get lost in the Sawyer's nymph topic.

Your Tups pattern looks more yellow and less pink than the other ones I have seen online. Is that on purpose or is that more accurate than others?

Thank you for posting.

Here are a couple old topics on Tups…

Good idea this be interesting.

So which is the original tups blend? On the left in the first picture?
I hate it when I think I'm buying organic vegetables, and when I get home I discover they are just regular donuts.
http://www.oldhatflytying.com
Top

Well, the Tup's Indispensable is one of those flies that has captured the imagination of generations of fly tying aficionados, although some might say fly tying perverts. The dubbing blend of its originator, Mr. R.S. Austin, was a closely guarded secret for decades. Austin and his family tied and sold Tup's Indispensables commercially, hence the secrecy.

Only two individuals outside the Austin family are reported to have known the recipe, one of whom was G.E.M. Skues. Skues gave the fly its snappy name (with Austin's approval) and modified Austin's dry fly recipe as a nymph variation. Skues also kept the recipe secret for decades. Following R.S. Austin's death in 1911, and after Austin's daughter retired from fly tying in the early 1930s, and with the Austin family's approval, Skues published the recipe in 1934 in an article in the Flyfishers' Club Journal.

The dubbing recipe is sufficiently general that exact color and shade are open to fly tyer interpretation. Skues' words are always eloquent despite the run-on sentences, and I'll leave it to him to describe the Tup's history and its magic...

Here is the true and authentic pattern. Is it too much to hope that at last we may now see the true patterns on sale in tackle shops?

Since it was first evolved by the late Mr. R.S. Austin of Tiverton, in 1900, the pattern of trout fly known as Tup's Indispensable has been widely known and used all the world over, in fact, wherever the brown trout is to be found, though too often (in the hands of other dressers, to whom the secret of its composition was unknown) tied with materials and in ways differing widely from the combination which the inventor would have approved; but down to the present time the secret of that combination has been rigidly preserved.

I believe that the late C.A. Hassam and I were the only two persons outside his own family to whom the late Mr. R.S. Austin confided the particulars of the composition of the dubbing which was the distinguishing and essential feature of that fly, and Hassam kept the secret religiously down to the day of his death, and I have kept it no less scrupulously down to the present day. I have always had it in my mind that the prescription was so valuable to anglers at large that it ought not to be lost, and it was my intention, if it were not disclosed in my lifetime, to leave a record of it to be made public when the time for its disclosure came. That time has now arrived, and I have been generously released from the moral obligation which so long bound me to keep it a secret, while fuming at the many absurd abortions which tackle dealers were selling as the real thing.

I believe that I was the first angler to use the magic dubbing. I was, at the time, in constant correspondence with Mr. R.S. Austin. The date I do not exactly recall, but, from a note in Mr. Austin's handwriting describing its first use, I judge the date to have been June 1900.

The essential part of this dubbing is the highly translucent wool from the indispensable part of a Tup, thoroughly washed and cleansed of the natural oil of the animal. This wool would by itself, be like seals fur, somewhat intractable and difficult to spin on the tying silk, but an admixture of the pale pinkish and very filmy fur from an English hare's poll had the effect of rendering it easy to work. There was also in the original pattern an admixture of cream coloured seal's fur and combing's from a lemon yellow spaniel, and the desired dominating colour was obtained by working in a small admixture of red mohair. For the mohair I generally substituted seal's fur, and I believe Mr. Austin did so himself. When wet the Tup's wool becomes somehow illuminated throughout by the colour of the seal's fur or mohair, and the entire effect of the body is extraordinarily filmy and insect-like.

In an unpublished volume of his favourite dressings Mr. Austin described the pattern in the following terms: I myself, suffering from a constitutional incapacity to leave well alone, developed a number of variations of the pattern, according as it was to be used as a nymph, spinner or pale watery dun, and Mr. Austin, while he stuck to his standard patter for the public, agreed that by varying the proportions of the various ingredients the dresser would get varying effects. He sent me a pattern of a little dark red spinner for use in July. It was dressed on the same principle, and I have a sample of it somewhere.

My variations were made by using different shades of seal's fur, not only in the reds but oranges, yellows, cream and a range of olives, and in all shades I found the pattern useful. The reds and orange dressed with sharp cock's hackles made a range of spinners, and a small light golden spinner may be similarly hackled. The pale yellow and the cream hackled with pale blue cock's hackles reproduce the pale watery duns, while the same colour and the olive hackled with a short soft woolly hen's hackle produce a series of nymphs, which are quite attractive. Different shades were also produced by varying the quantity of seal's fur.
...
Mr. Austin meant his fly for "the ordinary red spinner which comes on in April, and lasts goodness knows how long afterwards." He used to wind on two or three turns of Pearsall's yellow silk to show at the tail. He wrote: "The small yellow tip is conspicuous in the natural fly, and I have regarded it as a very desirable feature in the imitation."
...
The effect of mixing hare's poll with intractable materials like pig's wool and seal's fur was known to me some years before the invention of Tup's Indispensable. I owe it, in fact, to Headley F. Norris in the prescription which he gave me in the middle nineties for the make up of a seal's fur body of a March Brown, in which were combined the sweepings of a whole series of green, yellow, olive, orange and red seal's fur, teased up, together with an admixture of hare's poll to blend the mixture and make it tractable. Other soft furs such as blue English squirrel may be used for the same purpose, but the advantage of the hare's poll is that it does not produce the dirty effects which blue furs produce, but it blends in nicely with the various seal's furs and basic wool.

Sometimes in tying Tup's Indispensable I omit the yellow spaniel fur and substitute a little brownish yellow seal's fur with no green in it.
Top

You beat me to it! The reason that I posted the Tups material was that the latest edition of the Journal Of the Fly-Fishers' Club of London just reprinted the original 1934 article and I thought that some would like to see it. But you saved me the trouble! There is a photo of two TI's dressed by Austin that reside in the Club's collection, a copy of the hand drawn instructions on how to dress the TI by Austin, and a photo of the Club's sample of TI mixture as given to Skues in 1900. From the photo, it looks very much like the sample that I posted, much more yellow than pink.

In Eric Taverner's DeLuxe edition of Trout Fishing From All Angles are two original TI's dressed by Austin's daughter. Because they are behind "perspex", an early form of transparent plastic, they are almost impossible to photograph and removing them would damage the mounting. Suffice to say that they are quite unlike the majority of TI interpretations. I have modeled my dressing as closely as possible to those flies.
Top 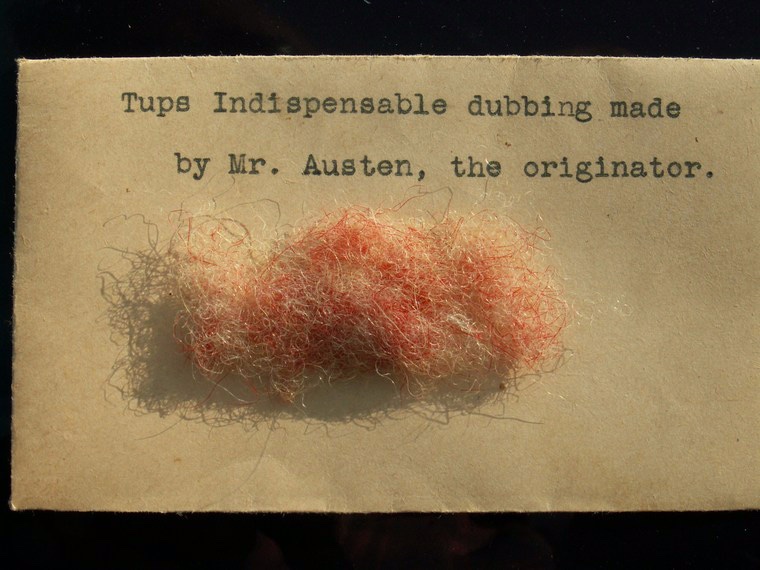 John,
Please ... oh PLEASE ... if you have a copy, post a photo of Austin's Tup's dubbing mixture given to Skues and in the Flyfishers' Club collection.

Bob, what do you know about the above photo? Where did you get it, and do you know anything about its authenticity? I've had a copy of that photo for several years, ever since you posted it on Clark's board. It is the photo that I model my Tup's blend after, but the fact that "Austin" is misspelled and not knowing any details makes me a little worried.

My attempts at a Tup's blend... 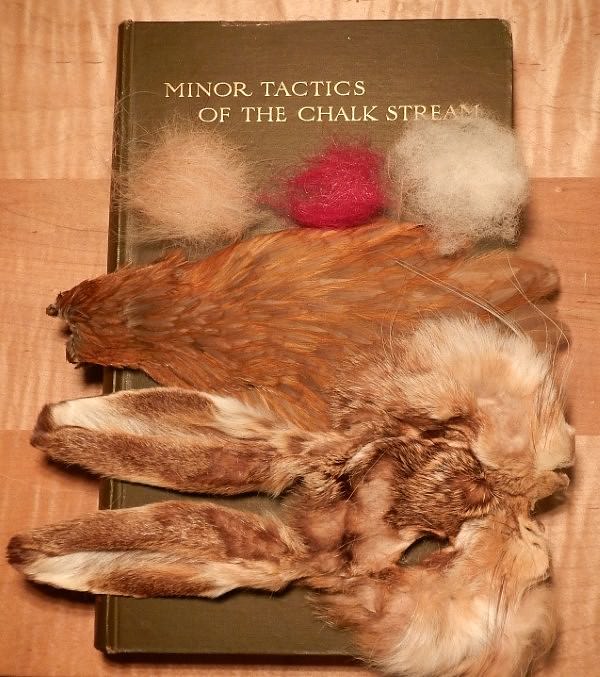 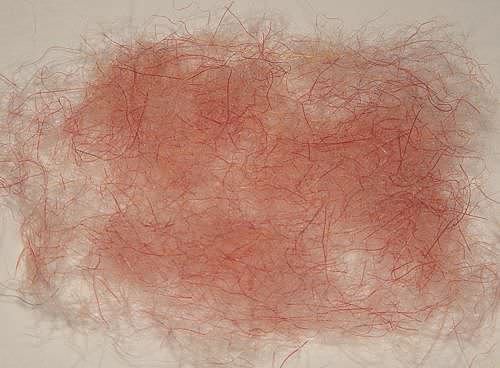 Both samples are much pinker than the sample shown in the FFCL's Journal. Of course, any fur blend can and will vary with each batch and over time. I think the point to be made is that the original was not the solid pink that most TI's now exhibit, Syl Nemes' flies being a good example of this color shift.
Top 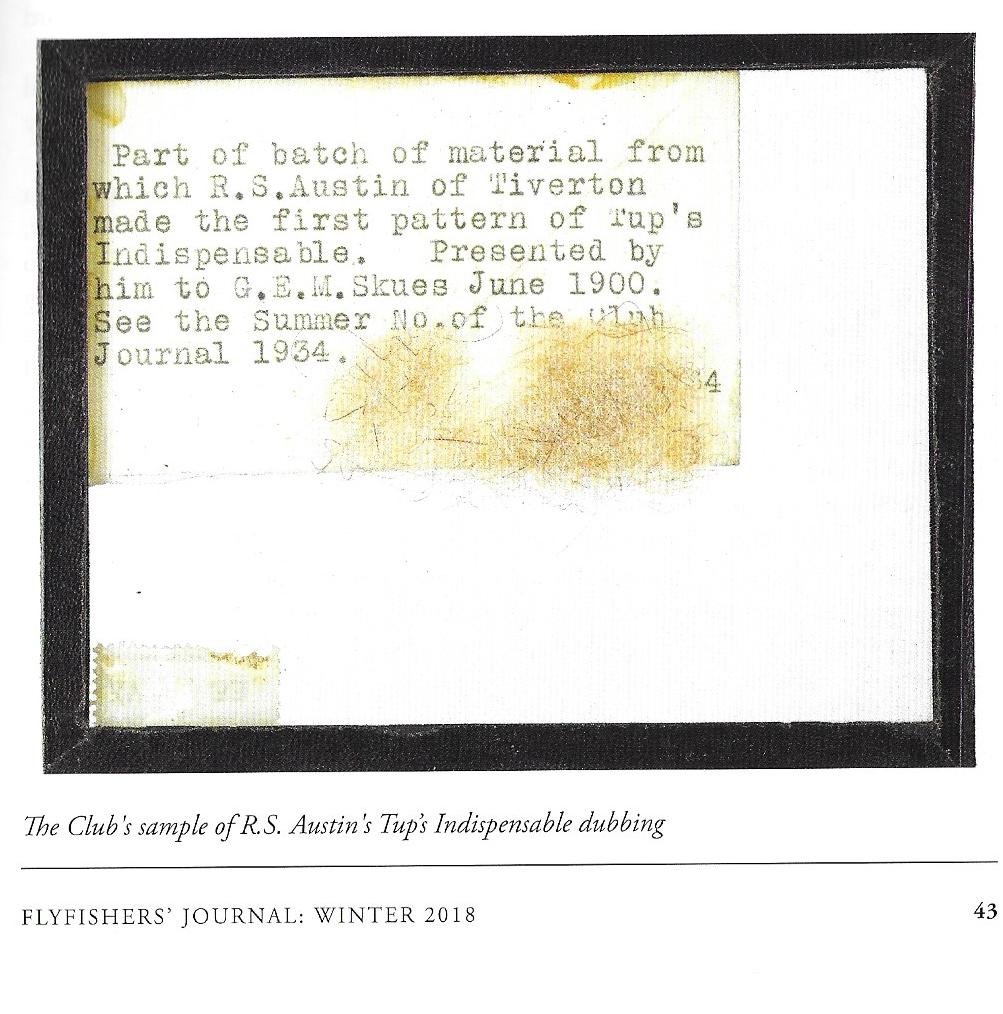 Here is a scan of the sample that is shown in the FFCL Journal. The photo in the Journal isn't the best and some allowances should be made for the scan, but I think it translates the color relatively well. In the article, it is stated that the sample was kept in a dark cupboard and "retains it's subtle shade with a delicate pink tinge, and if viewed under a magnifying glass the materials that make up the mixture are clearly identifiable."
Top
Post Reply
65 posts