Ok folks, get ready to read the funniest thing ever about Tup's dubbing: 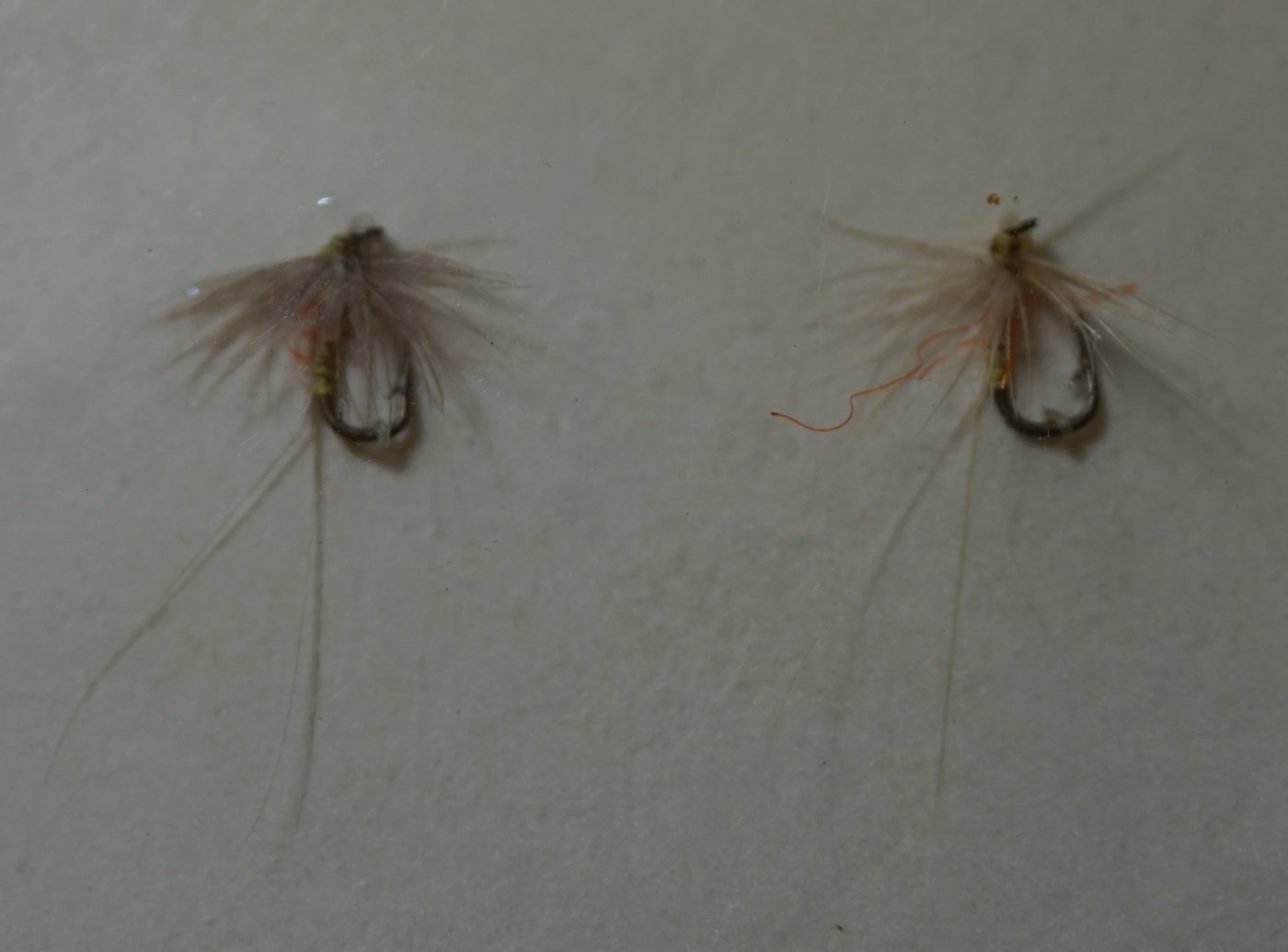 These flies are the specimen Tups flies from the De Luxe edition of Eric Taverner's Trout Fishing From All Angles1929, and were dressed by Miss Austin. The pattern on the left is the Nymph and on the right is the Spinner. I apologize for the blurry photo but the flies are housed under a sheet of "Perspex," an early form of plastic, and this was about the best I could do. At least it shows the basic configuration and style of the flies.
Top

And a tip of my hat to John the Magician! Much better!

What doesn't show is their size, no larger than a modern 18.
Top

I've cleaned that same tup's wool and it was nothing compared to washing an entire fleece. I made the mistake of washing it in the bathtub. The bathroom smelled like a barnyard and the water was the color of you know what.
Top

I believe it was “carded “ using a wool carding block. That’s what I use. It turns out great!
Bazza
Love both fly fishing and fly tying, been doing it for a while
But not much good at either
Top

An old timer once showed me how it used to be done. He held the dubbing between his thumb and his forefinger. He brushed the dubbing with a toothbrush which not only aligned the fibers but also "removed the shorts" as he called them. I work with a large amount of dubbing so I have a full range of combs and cards.
Top

While following a link provided elsewhere by wsbailey, I navigated my way to a redux of the website of Preben Torp Jacobsen (see "flyleaves.dk"). After switching on the Translate feature, I began reading some of his fascinating posts, one of which deals with the Tups Indispensable pattern and its materials.

It seems that Torp Jacobsen was personally well acquainted with both Skues and Oliver Kite, and so had access to much of what was happening in the world of fly fishing and fly tying during the late 19th and early to mid 20th centuries. It also known fact that-- despite his age -- he used computers and scanners and printers from their inception and over the years developed excellent skills dealing with accurate and realistic imaging. I mention this because included in his piece about the Tups is a graphic containing vibrant images of what his research concluded were the true material components of the elusive thorax dubbing. I offer it below as a source of interest and comparison with the comments, photos, etc. posted previously by others in this thread. 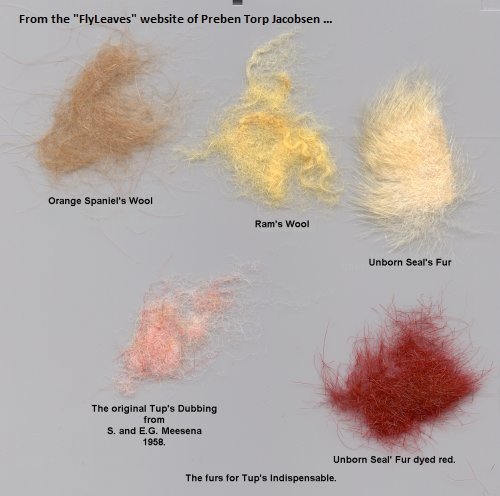 Some of the same morons who throw their trash around in National parks also vote. That alone would explain the state of American politics. ~ John Gierach, "Still Life with Brook Trout"
Top

Thanks for bringing this back Bill. I have some Ram's wool but it's more white than yellow as shown. Saying that when shared from the ram, what I have seen is urine stained and just down right nasty. Once washed it does not not have the yellow tint as is shown. Just sayin.
"I like beer, do you like beer, I like beer a lot."
Top

I'm sure you're right, Bob. The "final" color of the ram's wool is no doubt a function of how blonde he was to start with, how old he was when he got shaved, how much cleaning was done to the fur, etc., etc.
Some of the same morons who throw their trash around in National parks also vote. That alone would explain the state of American politics. ~ John Gierach, "Still Life with Brook Trout"
Top
Post Reply
65 posts