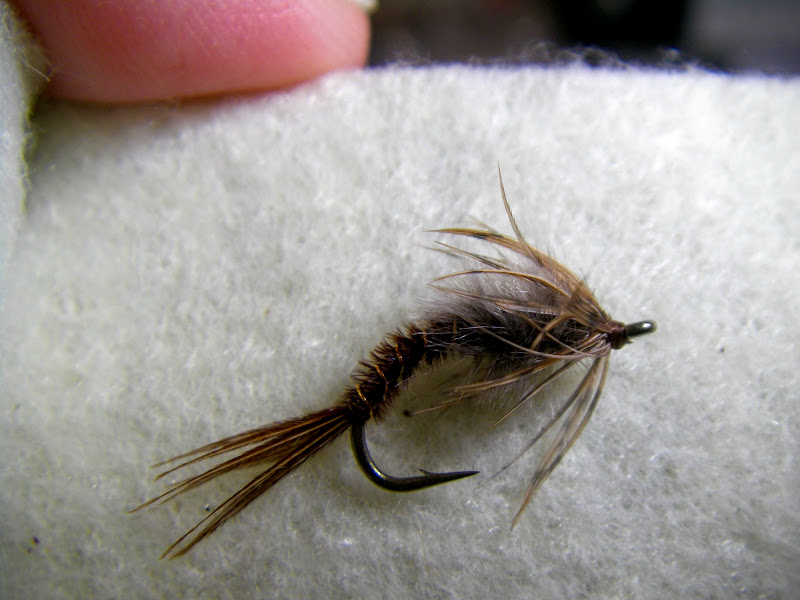 Note on Proportions:
Tail Length - 1/2 the body length
Abdomen and Thorax Lengths - 50/50 split with body tied well into the bend (see photo above) 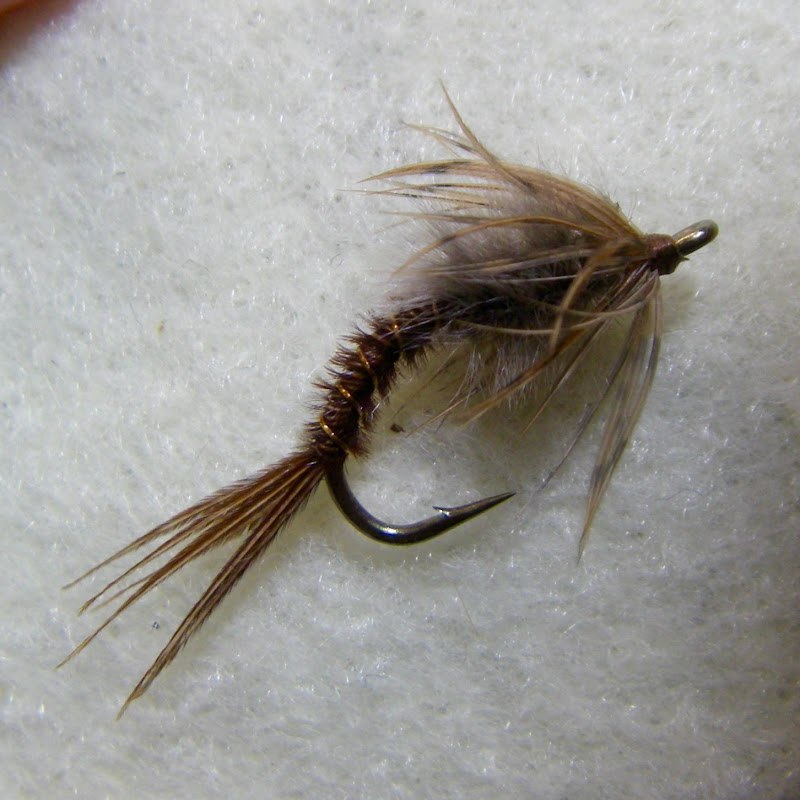 Great looking fly and I like the use of the copper rib.

I would also tie it up with gold and silver ribs for fishing.
Top

Good looking fly. For a minute there I almost thought it was tied on a keel hook.
Top

Now that you mention it, the hook does sorta look like a keel hook. I'm hoping the curved hook will give a "wiggling" appearance, which may add a touch more life to the pattern. The tail is a bit long, but again it was a tying choice. In theory, the tail fibers should move more freely than short ones.

I bought some of the keel hooks back when they were in vogue. I thought they would snag up less on the bottom, given the hook riding up position.
Top

Karsten sent me a set of keel hooks several years ago and I used the hooks to tye bendback bucktail minnow patterns. 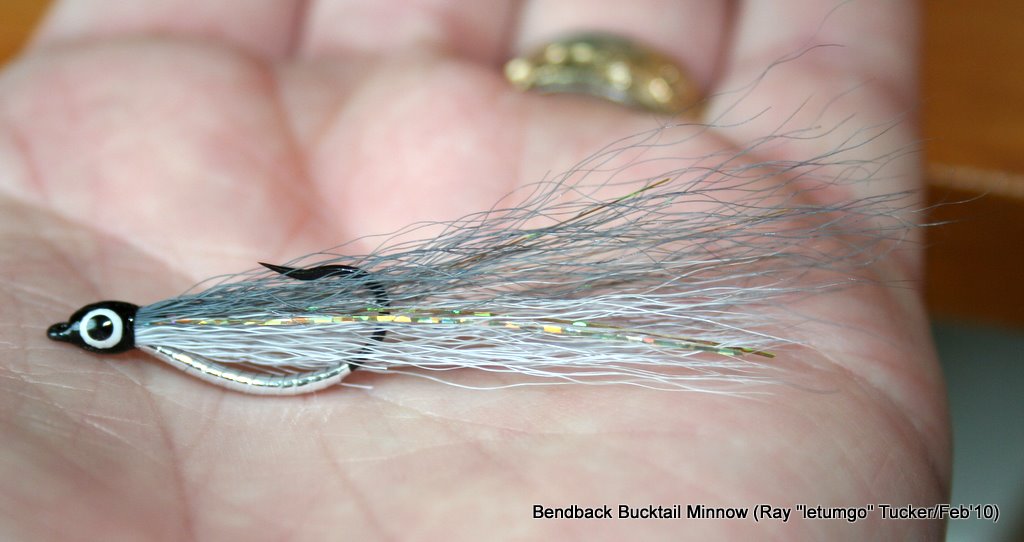 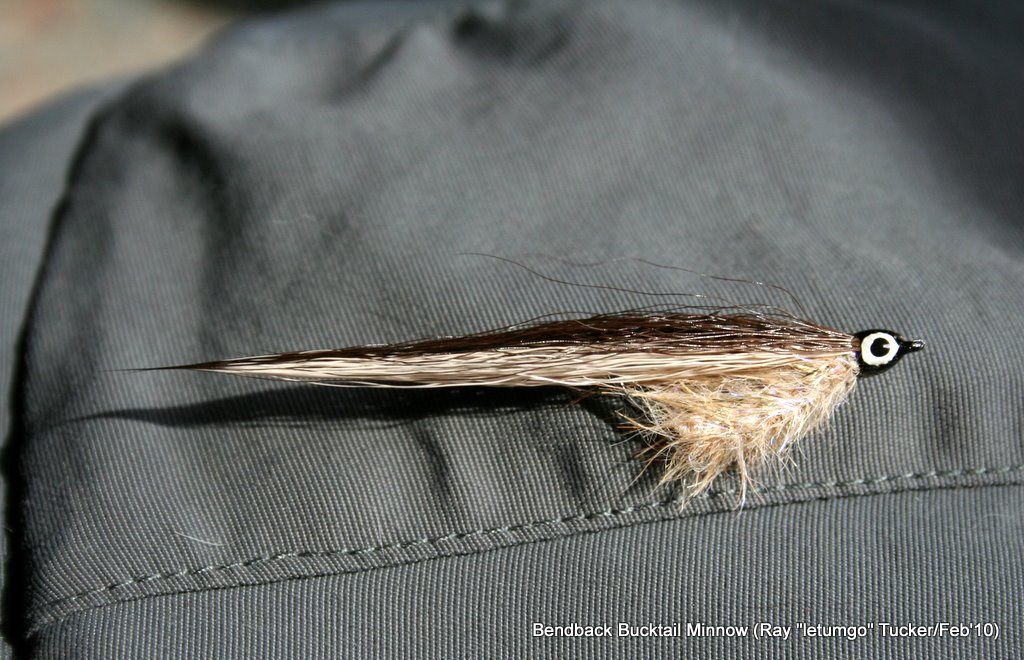 The keel hooks were a nice element to the design of the hook, and helped keep the fly weedless for the most part.
Ray (letumgo)----<°))))))><
http://www.flytyingforum.com/index.php? ... er=letumgo

Very stonefly-ish, well the nymphal stage anyhow. Would look great tumbling down a fast run where such aquatic insects abound.
"Listen to the sound of the river and you will get a trout".... Irish proverb.
Top

I spent the evening playing around with testing how this fly behaves in a little clear dip tank (acrylic baseball card holder). I filled the tank with tap water earlier today and allowed it to come to room temperature and degas for a while. Then I dropped this fly into the tank, to see how it looked in the water.

To my surprise, it landed on the surface of the water and sat there, resting hook point up. The fibers along the pheasant tail, and the ostrich herl thorax supported the fly very well. Very slowly, the pheasant tail began to soak up water, but the fibers of the ostrich herl thorax formed a protective vapor bubble. I played around with the fly for nearly 40 minutes, taking pictures and finally poking it under water with a bodkin needle, so see how it looked under water. Here, take a look for yourself...

PHOTOS FROM DIP TANK TEST
Photo of the fly, after I dropped it into the tank. The first view is looking straight down on the fly, as it is resting on the surface of the water. 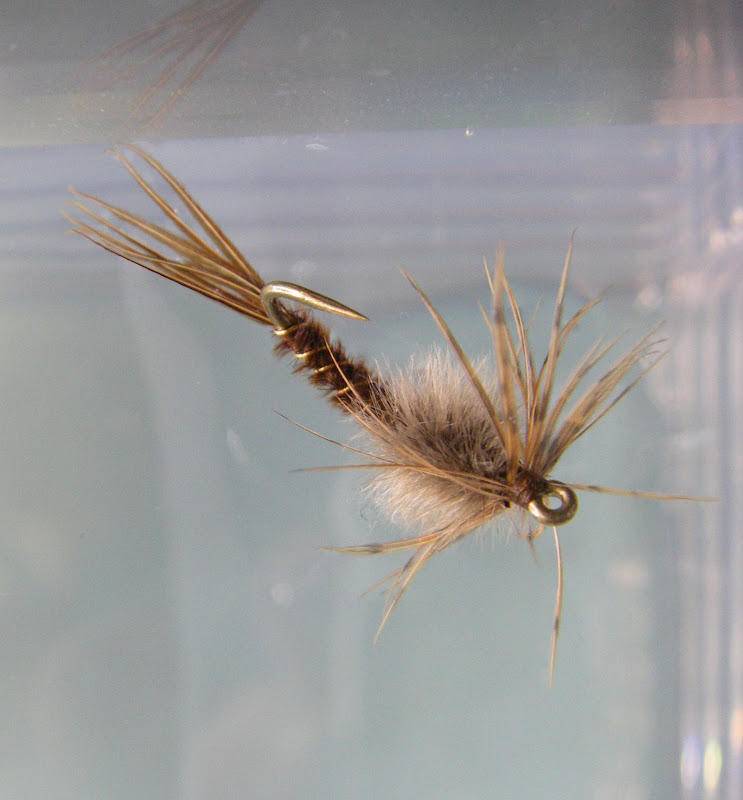 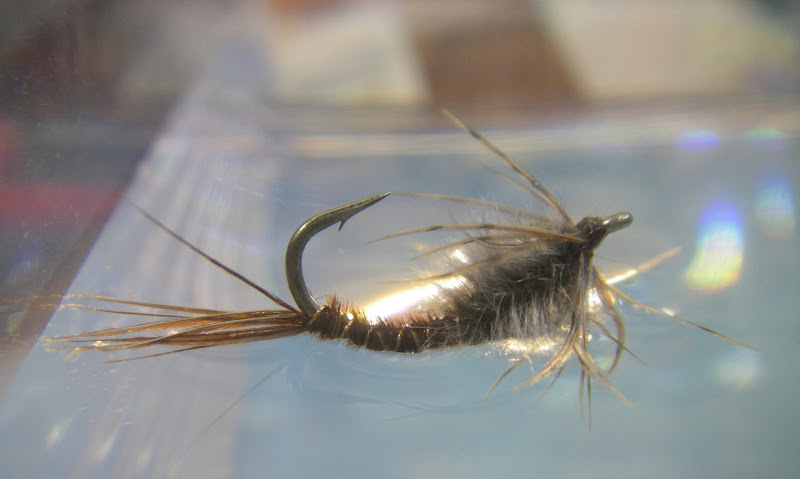 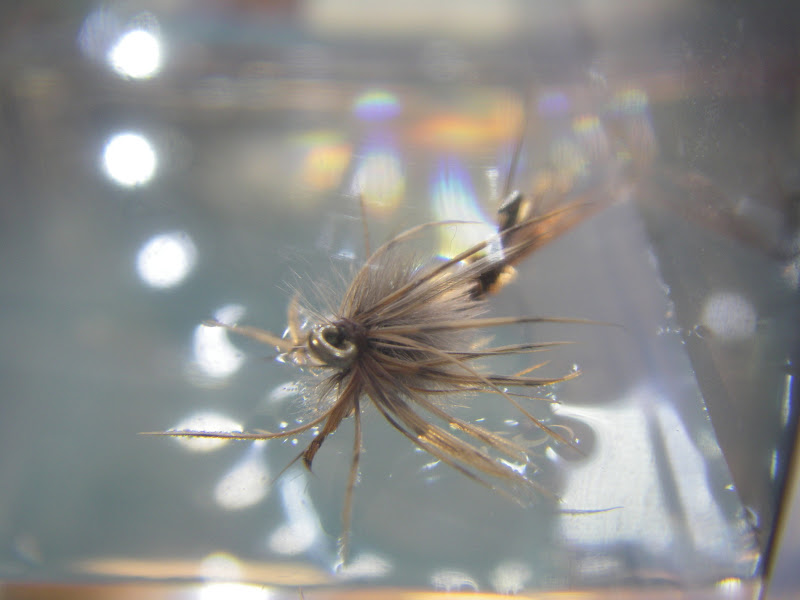 View looking up at the fly, from below the water level (fishes eye view): notice how the profile of the tail and hackle look very insect-like 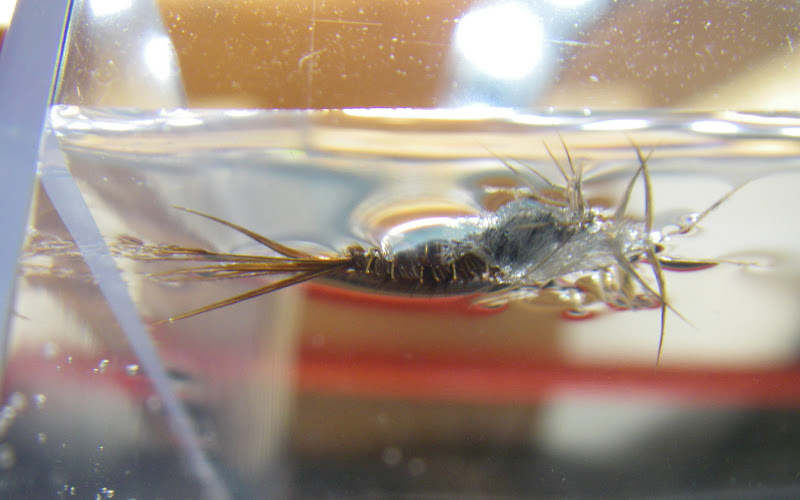 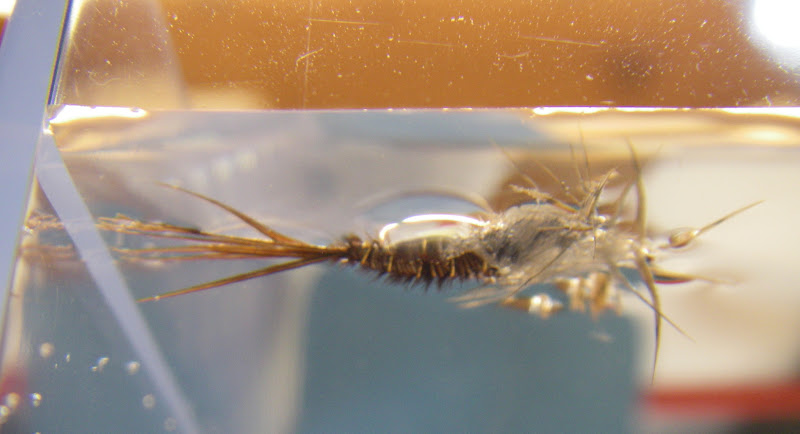 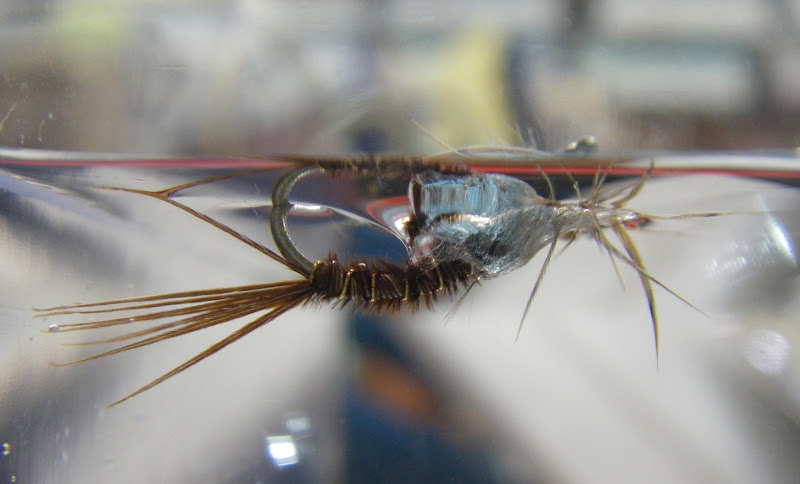 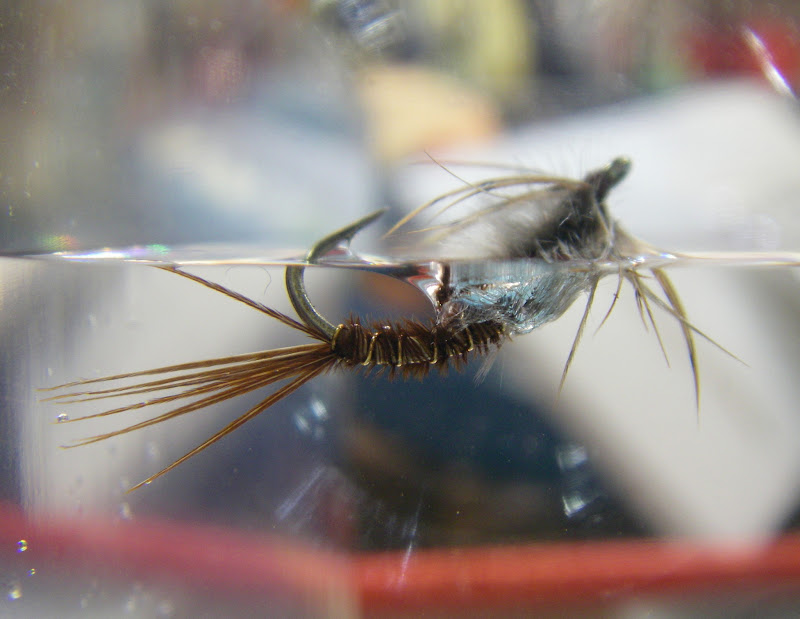 Eventually the pheasant tail (abdomen) sank below the surface: 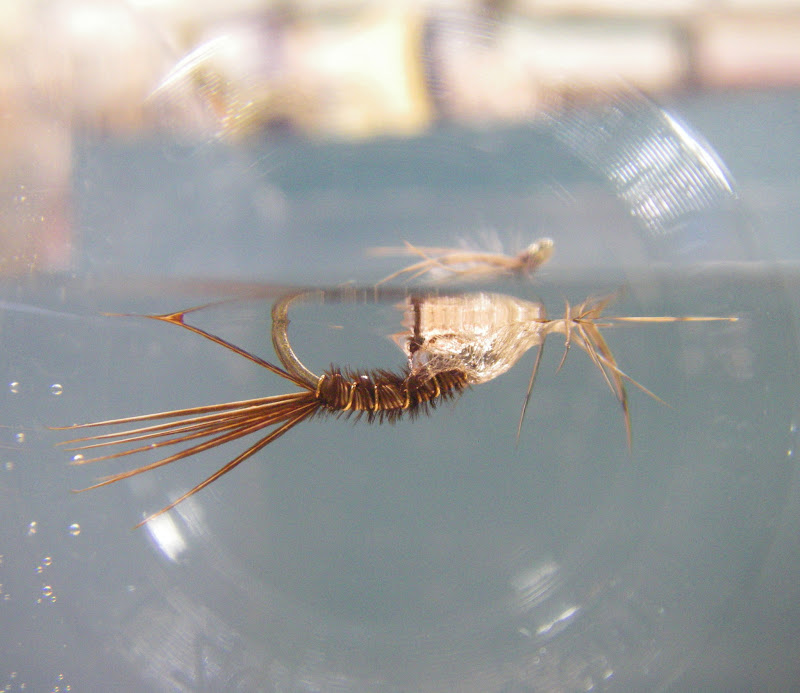 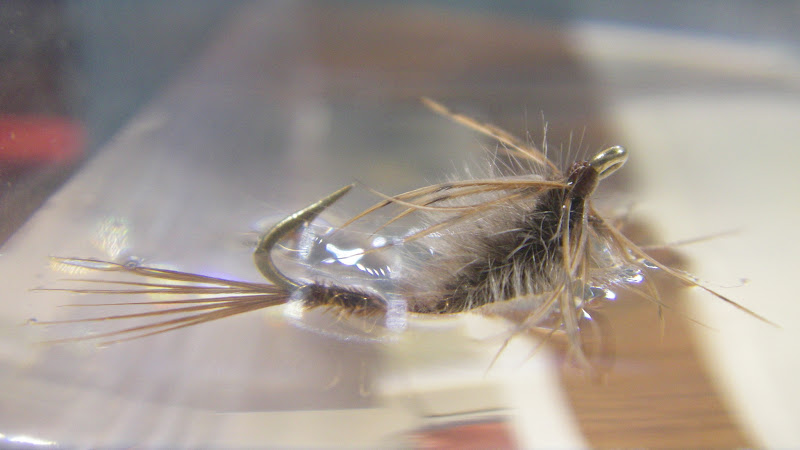 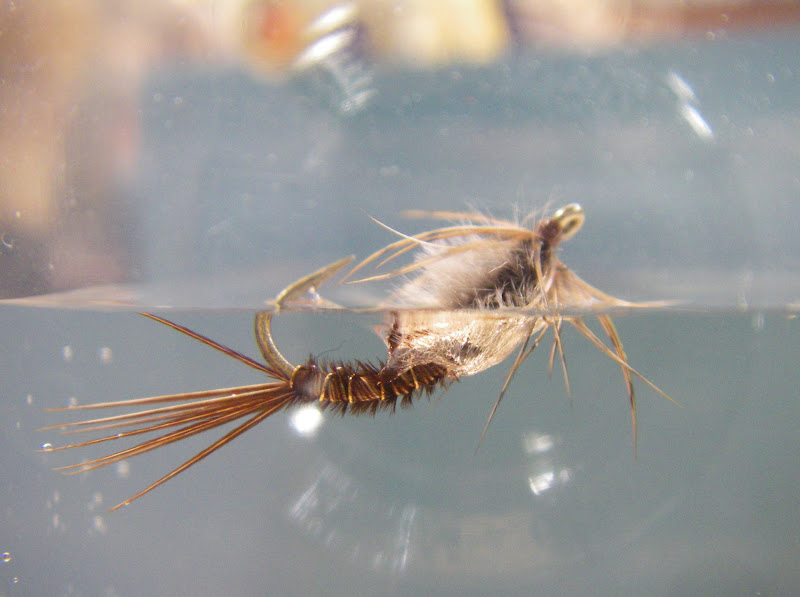 Fishes Eye View Below the Surface: Doesn't that look like a real insect? In a word...buggy! 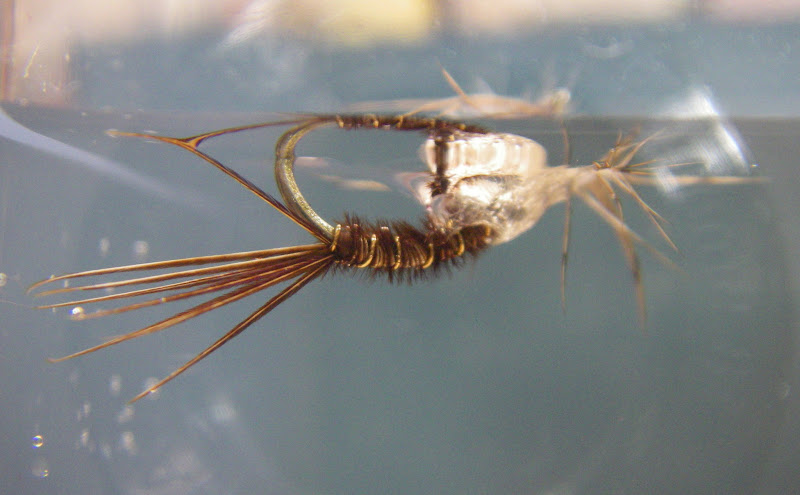 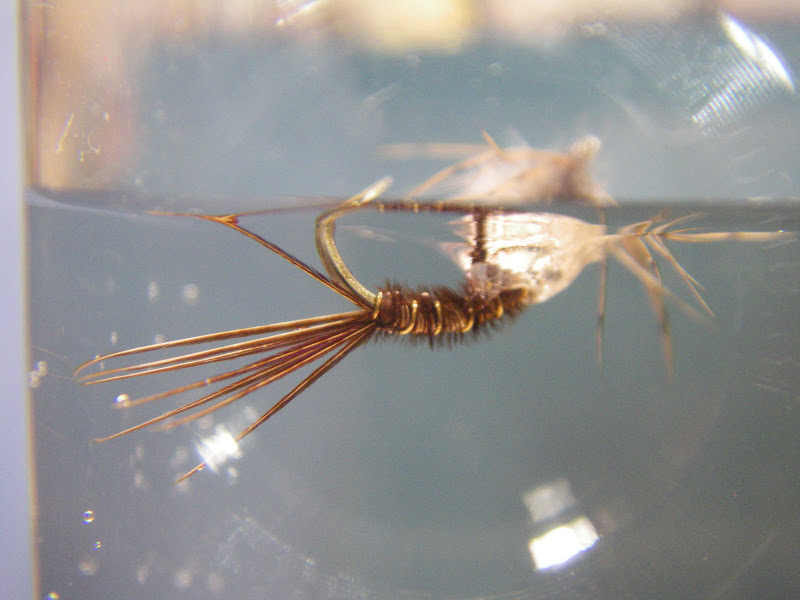 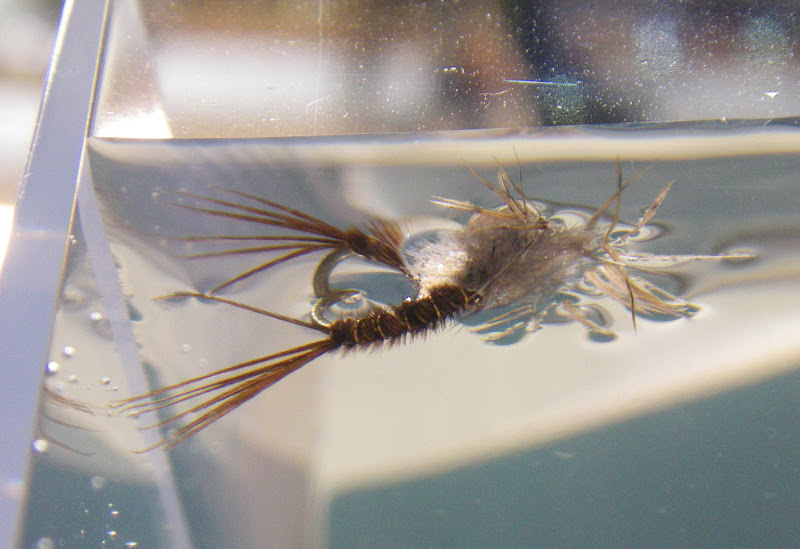 After 30 minutes, I took a bodkin needle and stuck it into the eye of the hook, to push the fly below the surface: 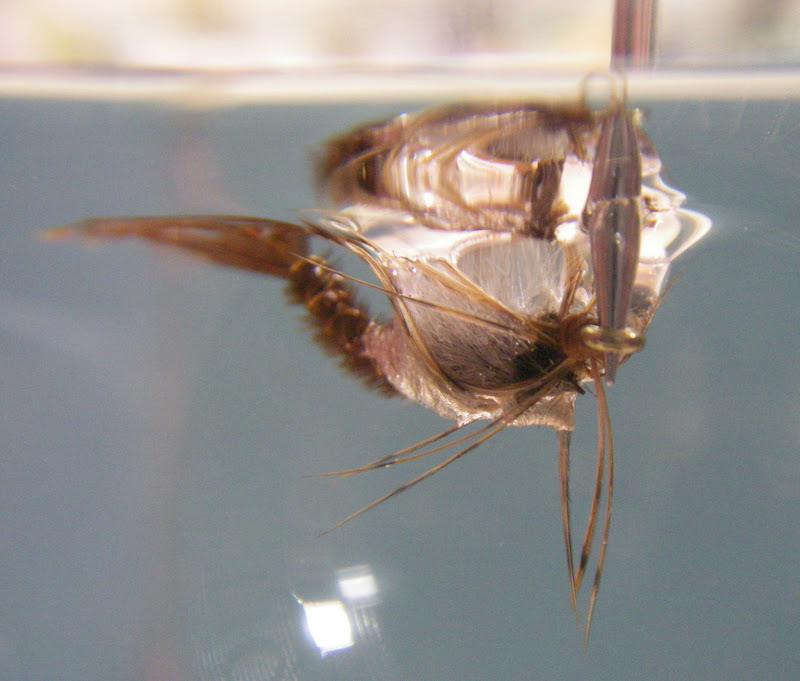 Fully Submerged (notice how the ostrich herl fibers trap a gas bubble around the trorax of the fly): 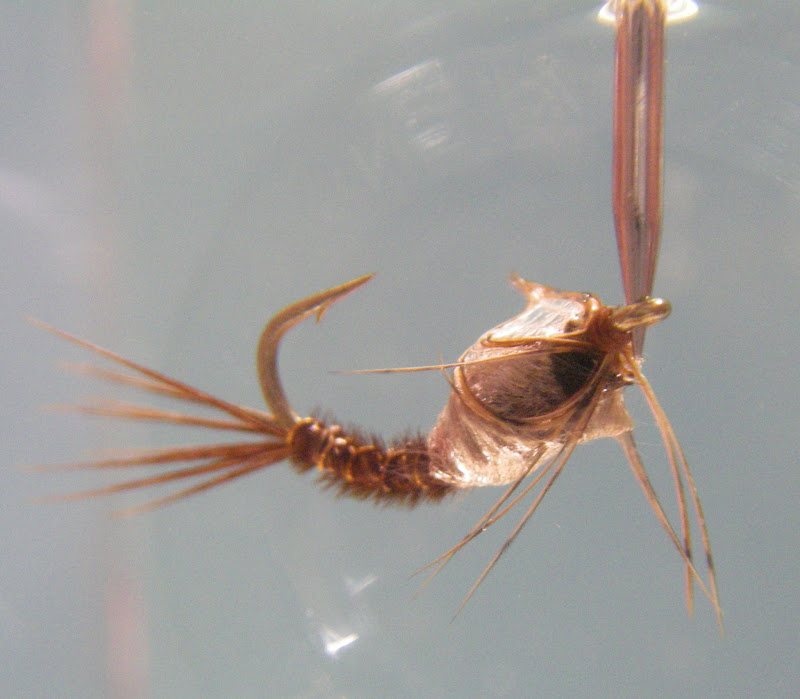 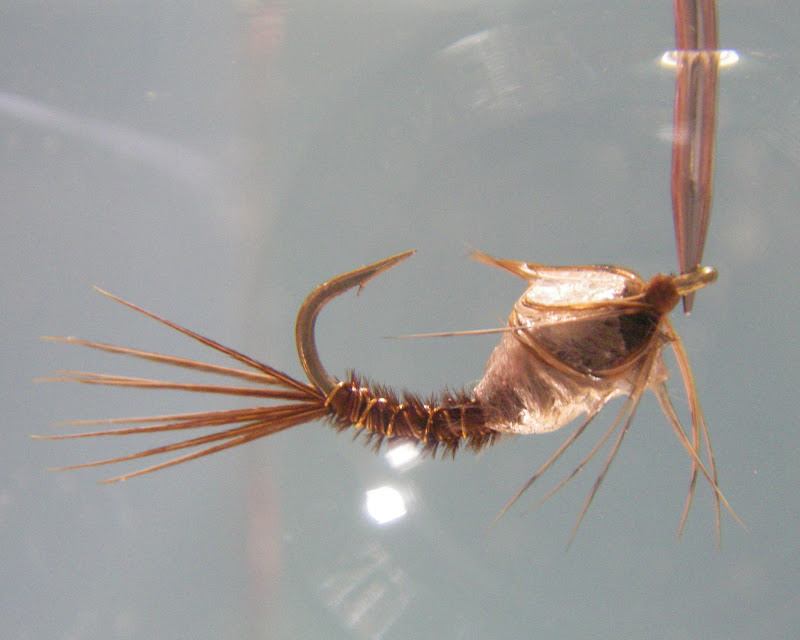 Twisting the fly around, to look at it from different angles: 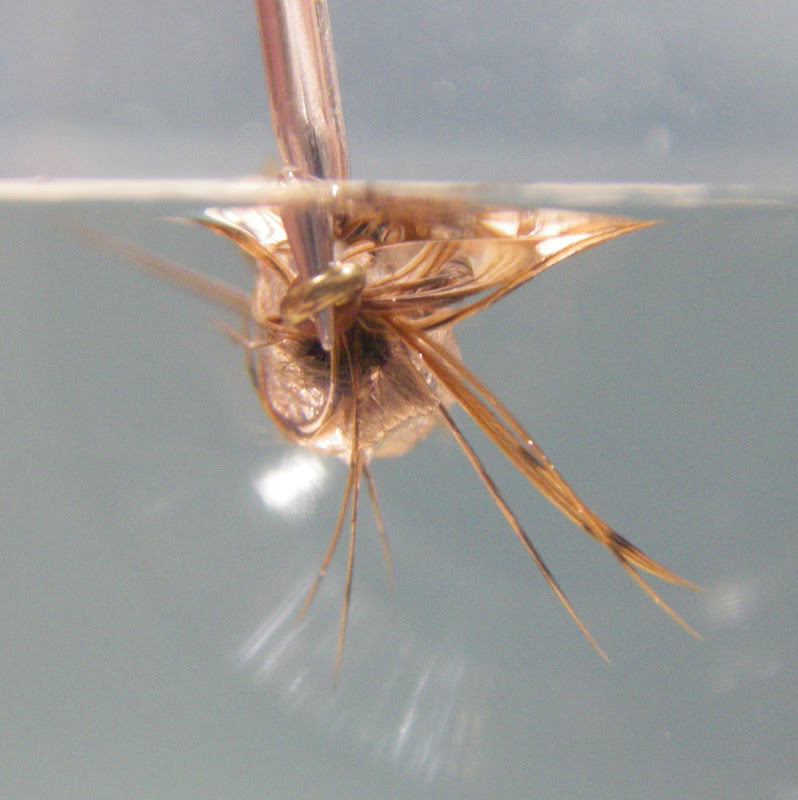 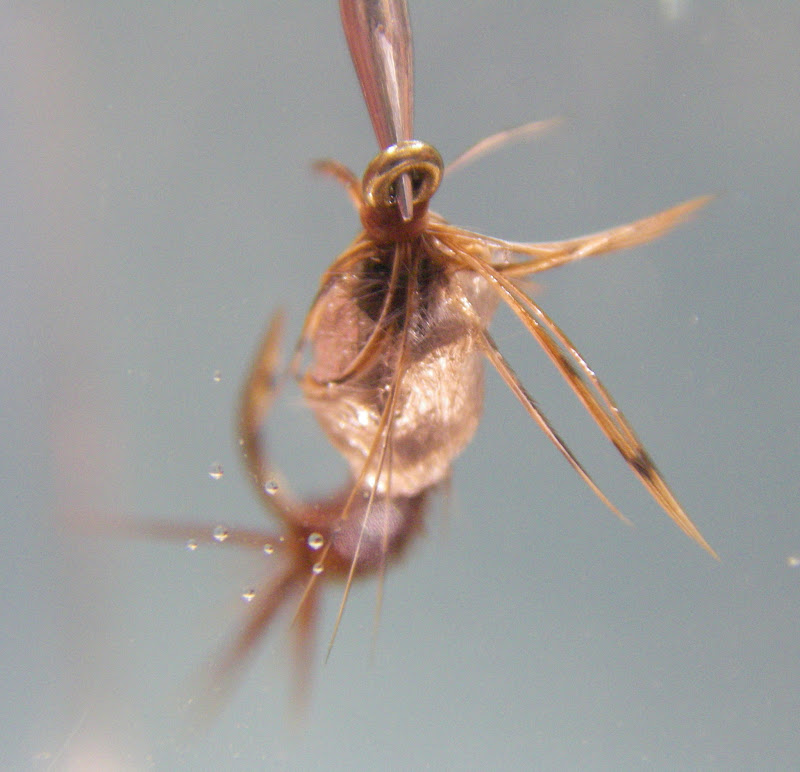 Even after being fulling submerged for several minutes, the fly would still float flush with the surface film: 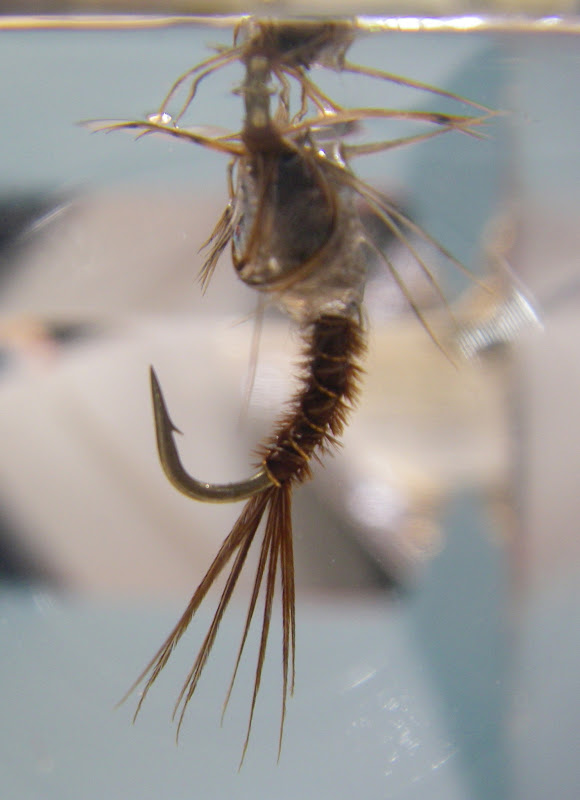 After 40 minutes, I dropped the fly into the water and it sank to the bottom, yet retained the air bubble around the thorax. 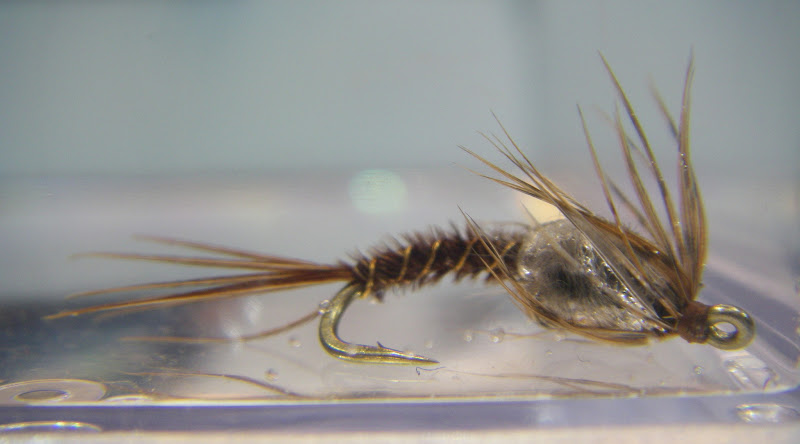 The fly should make a great emerger pattern. For a brief period this fly can be fished as a soft hackled dry fly, resting hook point up in the surface film. As long as you resist the urge to squeeze the air out of the thorax to completely soak the ostrich herl, the thorax will retain air, similar to the way CDC does. Hanging flush with the surface film, the fly will drift and look/behave like a natural emerging insect.

I am extremely happy with this fly, and can't wait to try it out come spring. The darn thing just looks like a real insect in the water.


Bill (zen leecher) - Your comment about the keel hook was prophetic. It looks like my fly keel's over and I've accidentally created a soft hackled dry fly emerger. For me, this kind of surprise is what makes fly tying so much fun. (that and it allows me to play in water like a little kid...)
Ray (letumgo)----<°))))))><
http://www.flytyingforum.com/index.php? ... er=letumgo

All good, Ray. That is an inspired pattern.
Some of the same morons who throw their trash around in National parks also vote. That alone would explain the state of American politics. ~ John Gierach, "Still Life with Brook Trout"
Top
Post Reply
35 posts