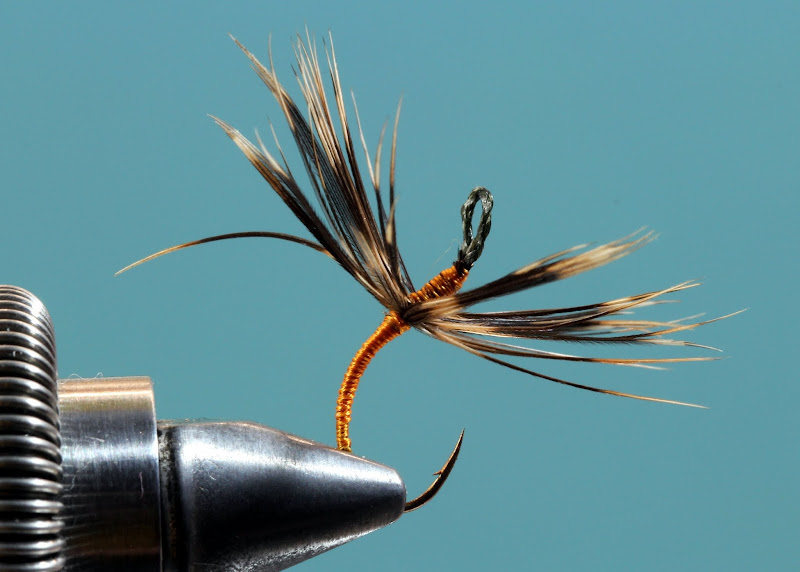 Note - The hook size is unusual. It is roughly equivalent to a Daiichi 1150/Size 12 hook. The shapes are similar, but this hook is eyeless and is much more flexible (read - springy).

Yes - This is whip finished, by hand, at the back of the fly, kebari style.

I bought a copy of Chris Stewart's Tenkara DVD last week, and have watched it again and again the past couple days. I tyed this fly during my demonstration yesterday. This is the first time I've tyed on an eyeless hook, which made for quite a challenge.

I dropped this fly into a little dip tank of water (like William's) and then danced the fly around under the water. I love how the hackle behaves on these flies. Very lively way of dressing the hook. I have another interesting observation about the fly, but I will save that for another time (need to try to photograph something I noticed during the demonstration).
Ray (letumgo)----<°))))))><
http://www.flytyingforum.com/index.php? ... er=letumgo

Brilliant dressing, Ray. You get extra points for "style".
"A man may smile and bid you hale yet curse you to the devil, but when a good dog wags his tail he is always on the level"
Top

I hope Misako sees this, Ray ... she'll love it (as do I).
Some of the same morons who throw their trash around in National parks also vote. That alone would explain the state of American politics. ~ John Gierach, "Still Life with Brook Trout"
Top

I love this one.
Top

Okay, I managed to take some photographs of an interesting characteristic of the reversed hackle of a Sakasa Kebara. As I was raising the fly out of the water, I noticed that the surface tension grabbed hold of the hackle and firmly resisted having the fly pull thru the surface layer. The hackle first bent out flat (parallel to the surface), then as the fly is pulled above the surface layer, the hackle fibers pulled up a dome of water. It was surprising how strongly the fly held onto the surface of the water. It felt like the fly was anchored to the water. By pulling up the extra water, under the hackle, the apparent weight of the fly increased significantly (equal to the water displaced above the surface layer). I think the kebari style hackle makes it easier to pulse the fly at the surface of the water, without pulling it up into the air. The light action of the rod tip would bend, but may not pull the fly off the water.

Anyway, here are the photos I took this evening: 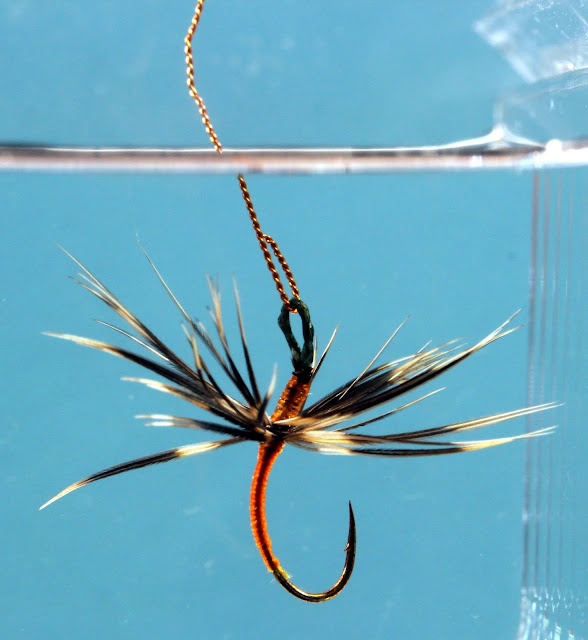 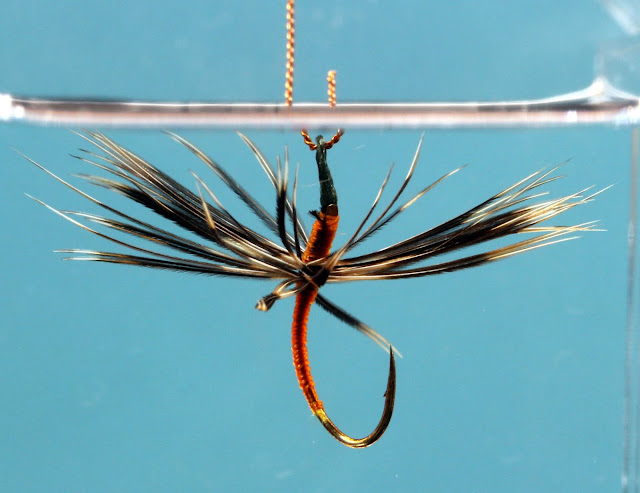 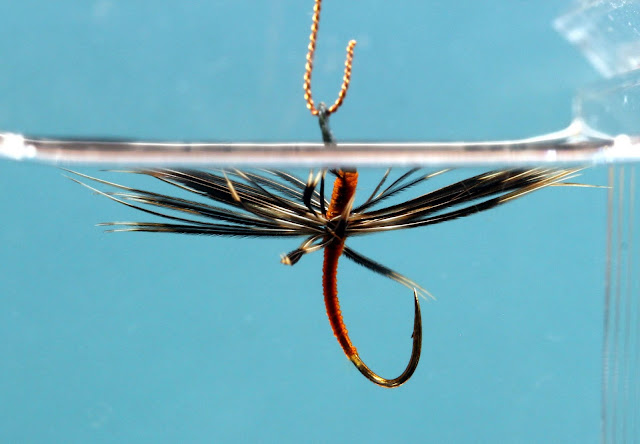 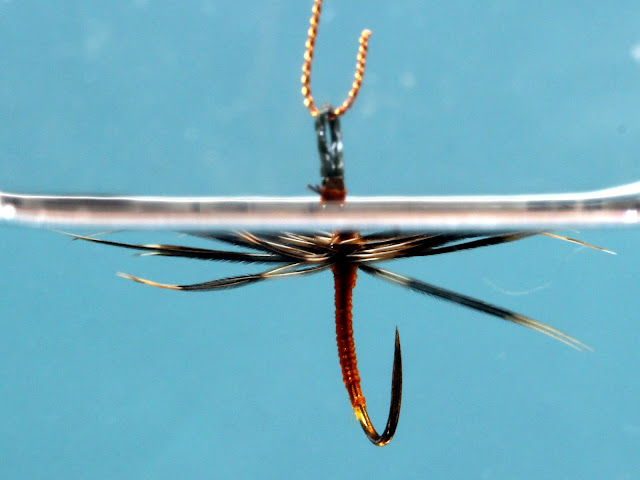 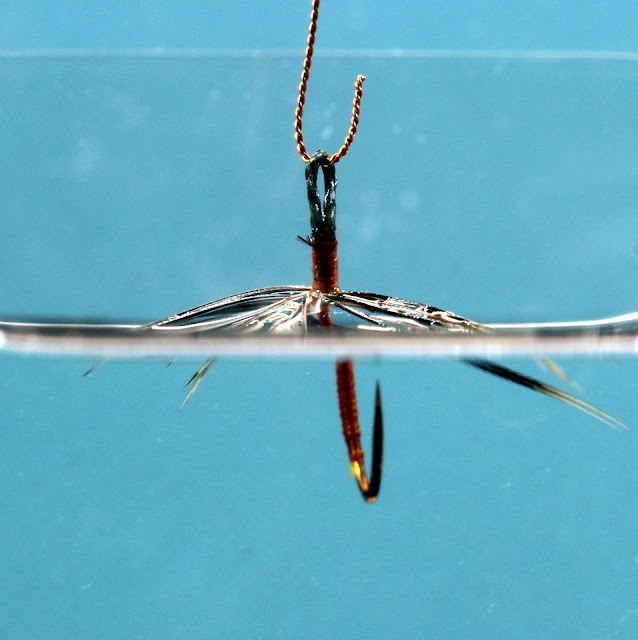 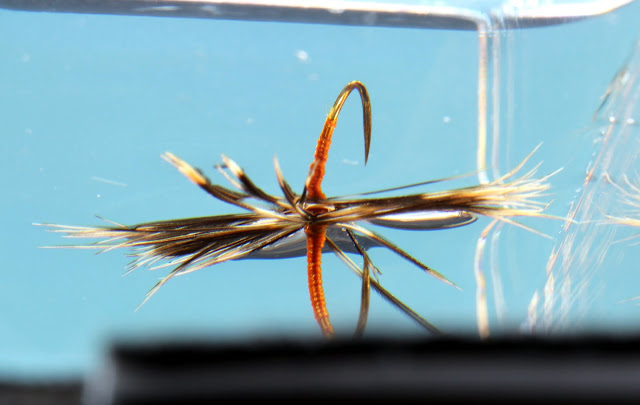 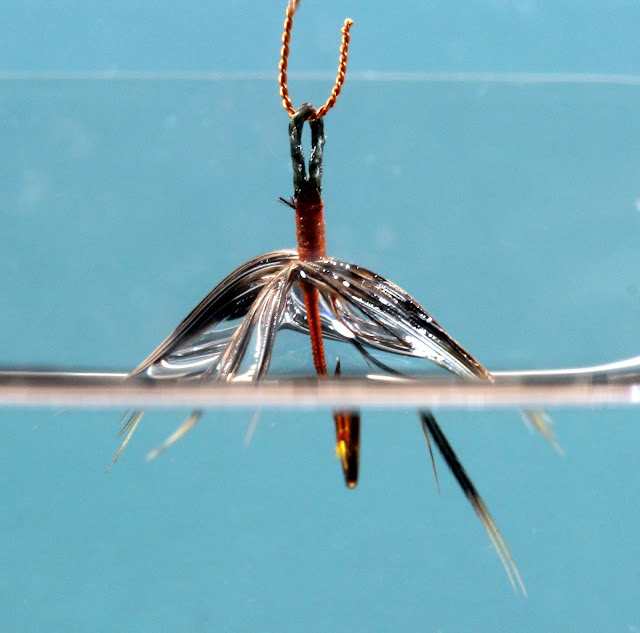 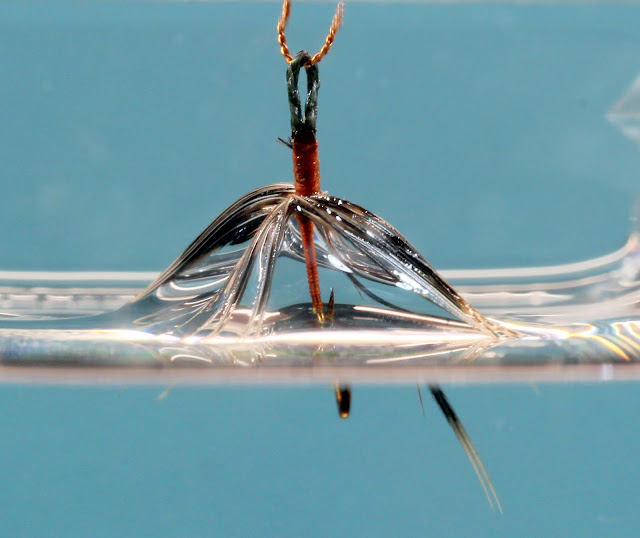 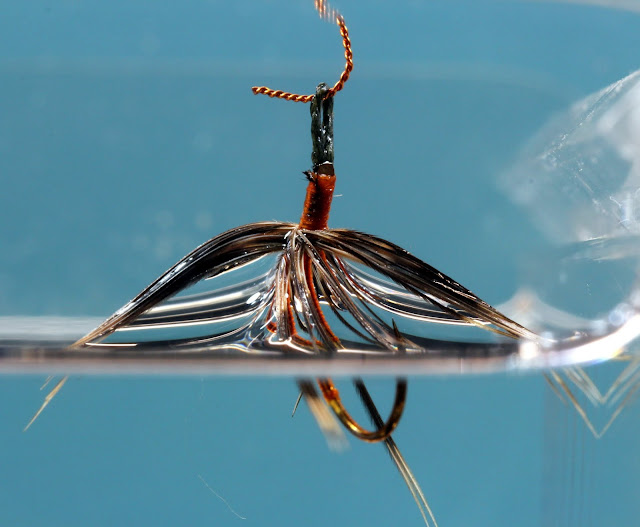 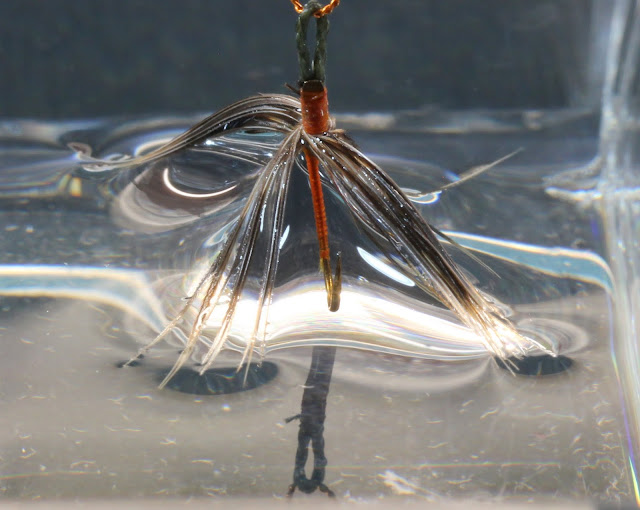 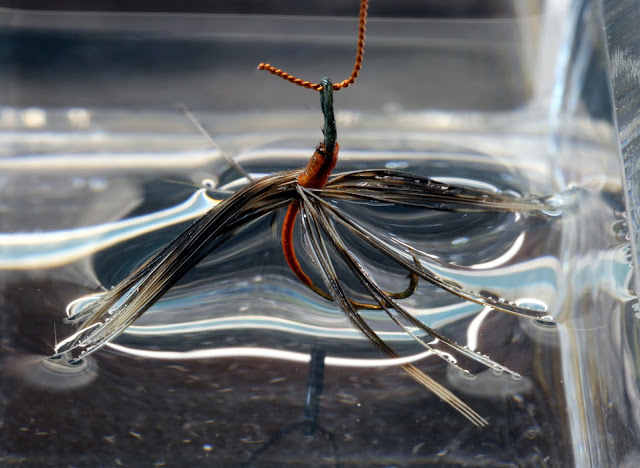 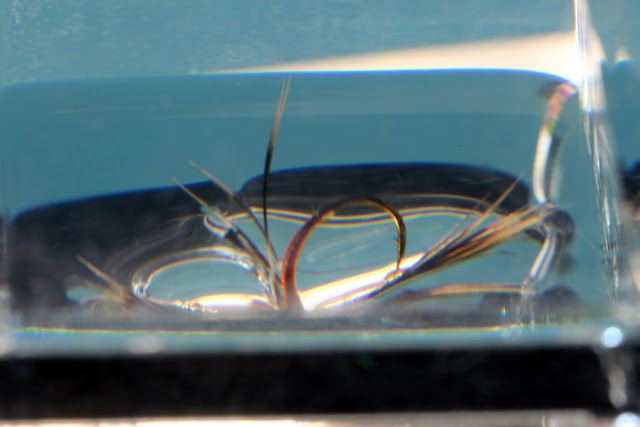 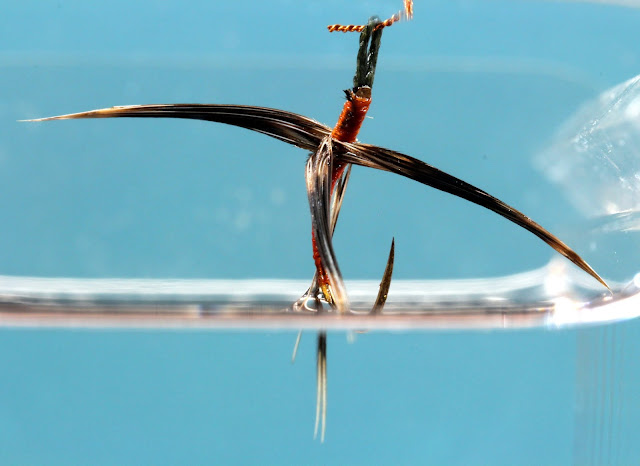 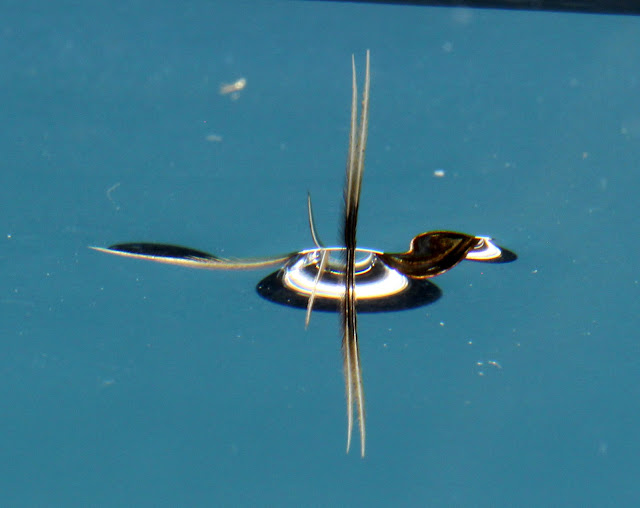 After this observation, I am convinced there is something special with the reversed hackle design. Very interesting.

EDIT - One of the other cool things about these flies, is their pronounced "head and loop-eye". In traditional Tenkara flies, the eye-loop was made out of silk gut, which was soaked in persimmon juice. According to Chris Stewart, this treatment helped stiffen the silk. It also imparted a red coloration to the loop, making it more visible during fishing. If you look at the photos, you will notice that the head and loop-eye project above the surface of the water, while the hackle and abdomen hand below the surface (sort of like a klinkhammer pattern). Holding tension on the fly, keeps the line off the water and helps the forward part of the fly serve as a strike indicator. The more I study these flies, the more I like the design. Neato!
Ray (letumgo)----<°))))))><
http://www.flytyingforum.com/index.php? ... er=letumgo

You are just going to have to do more of this! Excellent work!
Top

Dang!!!! Some kind of impressive display there...
Appears the pull was strong enough to straighten
out the twisted wire too.

Hank - I think I ended up bending the wire, as I was raising the fly up and down for the photos. At one point the fly dropped off and fell to the bottom of the tank. I then had to fish it back out with the wire. I adjusted the bend at the end of the wire, to try to get it back thru the loop eye of the hook.

The tug of the fly, was however, strong enough to bend the wire when it was held horizontally and lifted that way. The end of the wire would sag down, as the fly resisted pulling thru the surface layer. This series of photos was taken by clamping the wire in the jaws of my vice and pulling it up in small increments (photo - open vice - raise fly - close vice - refocus - take photo - repeat). Time consuming, but still fun.
Ray (letumgo)----<°))))))><
http://www.flytyingforum.com/index.php? ... er=letumgo

Excellent second part to the post Ray, simply brilliant photography.
You may be onto something interesting here...... trust an engineer to look for the non-obvious!

"Listen to the sound of the river and you will get a trout".... Irish proverb.
Top
Post Reply
23 posts